“I Have Set God Before Me Always…”: An example of the Maimonidean Approach to Jewish Law and Philosophy

We find in the Talmud two sources concerning the kavvanah, conscious intention, required for prayer. In Tractate Berakhot 31a, we learn:

Our Rabbis taught: One who engages in prayer must direct one’s heart Heavenward. Abba Sha’ul says: an indication to this effect is [the verse], “Direct (takhin) their hearts, let your ear pay heed” (Psalms 10:17).

In support of this approach to kavvanah, the Talmud refers to the distinctive practice of Rabbi Akiva, concerning whom it is said that one might leave him to pray in one corner and find him afterward in an entirely different corner due to his customary kneeling and prostrations.

In contrast, the Talmud in Sanhedrin (22a) deals with the law of the Jewish king’s personal Torah scroll. According to one opinion, the king is supposed to bind his Torah scroll to his arm as a sort of amulet, as it is said in Scripture, “I have set God before me always” (Psalms 16:8). The Gemara continues:

And according to the other opinion, how is the aforementioned verse to be interpreted? This other opinion must interpret that verse in the manner of Rabbi Hana bar Bizna in the name of Rabbi Shimon Hasida [who teaches as follows]: One who engages in prayer must visualize oneself as though the Divine Presence is before oneself, as it is said, “I have set God facing me always” (ibid.).

One who reflects deeply upon these two teachings will observe that they denote substantively different types of kavvanah. “Directing one’s heart” must mean, first and foremost, attention and concentration to the content of prayer. Indeed, the primary referent of Psalms 10:17, as explained by the students of Rabbeinu Yonah, is the purity of heart which is expressed through the course of prayer, and therefore Abba Sha’ul cites this verse only as an indication rather than a concrete source. Nonetheless, concentration for the sake of Heaven must include, at minimum, an awareness of the meaning of the words. This statement of Abba Sha’ul appears in several other locations in Rabbinic literature (e.g. Yerushalmi Berakhot 5:5; VaYikra Rabba at the end of Parasha 16; and the Midrash on Psalms 108), each time in relationship to the manner of intensive concentration required of an individual turning to God.

From the Gemara in Sanhedrin, by contrast, we learn about kavvanah of a different sort. It is not the words of prayer which are the focus of this second type of kavvanah, but the essential stature of the individual approaching in supplication before God. The obligation is incumbent upon the individual engaged in prayer to see oneself as though one is standing before the King, facing the Divine Presence.

A famous conceptual distinction posited by the great Rav Hayyim Soloveitchik of Brisk poses a differentiation between two types of kavvanah in prayer according to the thought of Maimonides. In Hilkhot Tefilla 4:16, Maimonides rules that anyone who engages in prayer must empty his heart of all interfering thoughts “and see oneself as though one is standing before God’s Presence.” Seemingly, by contrast, in Hilkhot Tefilla 10:1, Maimonides rules that one who prayed “and did not direct one’s attention must return and pray again with kavanna; [however] if one paid attention during the first blessing [of the amida], no more is necessary.” Rav Hayyim perceived an apparent contradiction between these two rulings of Maimonides, and innovated by way of resolution that there must be two different classifications of kavvanah in prayer. In chapter four of Hilkhot Tefilla, the kavanna spoken of is the consciousness of the praying individual that he or she is standing before the Divine Presence; without this recognition there can be no action of prayer at all. In chapter ten of Hilkhot Tefilla, by contrast, Maimonides deals with the requisite concentration of the praying individual to the words that he or she is saying, ruling that maintaining this concentration during the first blessing of the amida is sufficient to constitute a kavanna which applies to the entire prayer.

No less well-known is the appraisal of the Hazon Ish in his glosses to Rav Hayyim’s Hiddushim on Rambam, in which the Hazon Ish contends that the supposed contradiction pointed out by Rav Hayyim in this instance is in fact no contradiction at all, and therefore demands no resolution. According to the Hazon Ish, Hilkhot Tefilla 4:16 merely establishes a general rule that anyone engaged in prayer is obligated to maintain kavanna. In chapter ten of Hilkhot Tefilla, by contrast, Maimonides delineates the laws pertaining to this kavanna, and there he explains that on a post factum basis, one’s obligation in prayer is fulfilled so long as one sustained concentration for at least the first blessing of the amida.

However, through paying close attention to the language of the Gemara and the language of Maimonides, Rav Hayyim’s fundamental conceptual distinction may gain additional support. As it turns out, Maimonides, in chapter four of Hilkhot Tefilla chose to employ the wording of the Gemara in Sanhedrin, which defines the kavanna of prayer as standing before the Divine Presence, whereas in chapter ten of Hilkhot Tefilla, he relied upon the wording of the teachings speaking about directing one’s heart and mind. Indeed, it seems as though the Hazon Ish is correct in his contention that the declared basis of Rav Hayyim’s opinion – the contradiction between the rulings of Maimonides in chapters four and ten of Hilkhot Tefilla – invites a simple resolution from the standpoint of Maimonides’ legal classification. It may be that Maimonides never meant to disqualify prayer lacking the explicit consciousness of standing before the Divine Presence, but in line with the considerations raised by the Hazon Ish, decided that there must always be a minimum level of subconscious intent as long as the individual is standing in prayer. Taking all this into account, the essence of the distinction in both the language of the Gemara and the language of Maimonides still stands. It emerges that the two obligations of kavanna exist not only from a phenomenological standpoint, but also within the linguistic framework of the primary sources.

The piece was written for Kutonet Yosef, a memorial volume for my dear friend and teacher R. Yosef Wanefsky. My eulogy for him was published in the Fall 2000 issue of Jewish Action. The second half of the article examines Rambam’s treatment of Psalm 16:8 in his Guide.

The section ably translated by Yaakov Schiff has a bearing on the current debate about R. Hayyim’s methodology and the development of the Brisker school. On the face of it, the style of Hiddushei Rabbenu Hayyim haLevi on Rambam is typical of the yeshiva culture from which he emerged. That is to say, the trigger for R. Hayyim’s analysis is a difficulty in the Rambam’s text and the ostensible purpose of his discussion is to resolve the difficulty. If that is the case, then showing that the difficulty can be more plausibly resolved obviates the need for the analysis. This is indeed the brunt of Hazon Ish’s frequent marginal criticisms of R. Hayyim.

By contrast, several students of Brisker methodology have argued that it is primarily about conceptual analysis rather than the relief of textual problems. See the work of R. Elyakim Krumbein most concisely available in his essay and that of R. Avraham Walfish in the Orthodox Forum volume on Lomdut edited by R. Yosef Blau. R. Krumbein claims that the Brisker approach evolved. While R. Hayyim himself remained focused on answering textual problems, later generations moved to a more purely conceptual orientation. He traces this development through the work of maran ha-Rav zt”l, relying primarily on Shiurim le-Zekher Avi Mori and the fully conceptual framework of our mentor R. Aharon Lichtenstein zt”l.

The implication of my discussion here is that there may be a gap between the implicit methodology of an analysis and its literary presentation. In the case at hand, R. Hayyim may have developed a cogent phenomenological and conceptual distinction between levels of intention in prayer. This distinction would be valid independent of textual evidence. If R. Hayyim had noticed my reading of the texts he could have adduced it. Of course, the argument in print is more “dramatic”—rising from a supposed contradiction in Rambam, whereas I merely “made a diyyuk” in Rambam’s choice of phrasing. From a pedagogical point of view, the distinction is more easily rammed home through R. Hayyim’s discovery of the apparent contradiction rather than by elaborating on the more “microscopic” insight I wrote about.

Whether or not the above argument indeed captures the evolution of R. Hayyim’s new idea in this case, it may be applicable in other cases. In my contribution to the Orthodox Forum volume on Lomdut I quoted R. Isser Zalman Meltzer’s observation that written presentation of lomdut often differs significantly from oral presentation for pedagogical reasons. It is possible then that R. Hayyim’s own methodological consciousness may have been more “advanced,” i.e. closer to the later generations, than is reflected in the writing style of his major work. This hypothesis could be tested by reviewing notes of R. Hayyim’s students or letters he wrote.

Rabbi Shalom Carmy is a professor of Jewish Studies at Yeshiva College and serves as the Editor-in-Chief of Tradition journal. 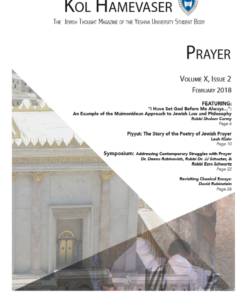