Avoiding Mixed Messages: Learning to Take Pride in Our Diversity

When I decided to attend Stern College for Women, I was warned that I would be in a bubble for the entirety of my college experience. I had conversations with concerned friends and family members who feared that I would not learn to interact with the larger world community. And, indeed, many of us at Stern are quite sheltered from the outside world, especially in comparison with our friends at other colleges. Yet, ironically, within my first few weeks at Stern, the warnings fell flat. Yes, Stern is a Jewish bubble. But people often fail to realize that this Jewish bubble is large and multifaceted. It is full of diversity.

Unexpectedly, I became apprehensive of that diversity. Prior to attending Stern, I had always been ensconced among people who valued, promoted, fostered, and supported women’s Torah learning on an advanced level. While I knew that there were others who disagreed with the view I was raised with, this awareness was almost hypothetical. I never had to confront naysayers face to face. And so, when I began Stern, surrounded by people with different beliefs from my own, I did not know what to do or how to react. In my first semester here, I was very defensive of my values. Sitting in the beit midrash, I imagined passersby quietly criticizing me for learning Gemara. I would get upset whenever I heard someone say something that was contrary to my beliefs. I would discuss my frustrations with my friends for hours.

But, over time, things changed. Largely thanks to the amazing opportunities afforded students by the Center for the Jewish Future, including Torah Tours and the Winter Break and Summer missions, I was exposed to Jewish diversity up close. Unlike my previous experiences, I was not just hearing about the diversity; I was interacting with that diversity and learning to understand it. Many of us consider ourselves tolerant and (ironically) belittle those who we see as less open-minded. And indeed, before I started Stern, I thought I was a tolerant person. But seeing how much my perspective has changed over the past few years, I realize that I was not really tolerant before. I had been so focused on diversity among Jews that I forgot to appreciate our commonalities. I did not and could not understand the beliefs of Jews different from me. But my experiences with the CJF changed that. I learned to appreciate that just as I was raised in a certain way and taught to believe in certain things, so, too, was everyone else. I do not have to agree with other people’s views, but I do need to respect them and to understand them, and that is one gift that Stern has given me: the understanding that, despite our differences, we are, at the core, one nation. In this sense, I have truly been enabled and ennobled by my time at Stern.

And I do not think that I am the only one who has learned to appreciate our differences. An amazing atmosphere full of diversity has been created here at Stern College. On an extra-curricular level, the Torah Activities Council oversees a large variety of clubs, including Mechinah, TEIQU, Chabad, and Bavli Ba’Erev, that appeal to all different populations of the student body. While there exists the common stereotype of women grouped together by seminary in the caf, I have also seen a myriad of friendships flower among people from very different backgrounds. On an academic level, there are Jewish Studies classes to fit the needs of women with different interests and varying proficiency levels. Personally, I have been given exceptional opportunities to continue my Gemara learning. Over my time here, not only has the number of women taking Gemara courses tripled, but a second advanced shi’ur was added to Stern’s course offerings as well. I also feel privileged to continue my learning in Stern’s Master’s Program in Biblical and Talmudic Interpretation (previously known as GPATS) next year. While I can only speak for Stern, I think and hope that my experience is reflective of a greater university value.

Yet, while YU may have taught me the invaluable lesson of appreciating our diversity, the administration, those responsible for publicizing and advertising who we are and what we are about, do not appear confident enough to declare that value of diversity to the greater Jewish community, specifically when it comes to advanced women’s learning. This disconnect between what YU teaches its students and what it publicizes to the outside world first became apparent to me after hearing about an incident that occurred a few months ago. Over the summer, YU Admissions wished to create a brochure with a photo of women learning in the beit midrash. The two women who posed for this photo were specifically asked not to learn Gemara, and instead to have a Tanakh open in front of them. Why this odd request? Because, they said, the last time YU put out a brochure with a photo of women learning Gemara, people called and complained. They do not want that to happen again. While I was upset when I heard about this incident, I eventually dismissed it as one isolated occurrence. Yes, people say imprudent things, but I have been given amazing opportunities at YU, I reasoned. This was not worth blowing out of proportion. But then the same thing happened again. Just recently, an almost identical situation occurred in our beit midrash. Before posing for the photo, the women learning there were asked to put away their Gemarot. Despite the opportunities for advanced learning at Stern, the administration, which oversees Admissions, does not seem prepared to publicize this aspect of our diversity.

Unfortunately, this is not the only example of YU downplaying the opportunities available to the population at Stern interested in Gemara learning. I have met numerous Stern women who have never even heard of GPATS, a program that takes place within our very walls! I have also met students who did not know that Stern even offered Gemara. While I originally felt frustrated with these students, I eventually realized that they were not at fault. Rather, their ignorance of these opportunities was a result of a lack of action by the administration. If YU offers a program and is, ostensibly, proud of it – or else why would the administration allocate some of its limited resources to the program? – they should be open about it and advertise it. All YU students should know about GPATS, just as they should know about Einstein, Cardozo, Ferkauf, Revel, Wurzweiler, and Azrieli. All YU students should know about the Gemara course offerings, just as they should know about the Bible, Physics, Jewish Philosophy, and History course offerings.

Most students at YU are well aware, judging by the YU paraphernalia constantly showered upon us, that YU wishes for us to have school pride. And, indeed, graduating from Stern College at the end of this year, I do have school pride. I proudly tell my friends of the amazing opportunities and wonderful people that can be found on our campus. But there are moments, like when I hear about the instances described above, that confuse me. What exactly does YU want me to have pride in? Every community has values, and YU claims to have values as well. Judging based on the course offerings and the opportunities available here, YU really does value the diversity of our Jewish nation. My experiences here have made me proud of that. But are they, those in the administration, proud of it? They need to either pick one side, to choose to cater to one part of the Jewish community, or be proud that they cater to the needs of many.

Perhaps this is not a realistic expectation; if the wider Jewish community is not so tolerant and proud of its diversity – as demonstrated in one way by the angry phone calls to YU Admissions – then how can YU be proud and manage to stay open, continuing to attract students from across the spectrum? If this, indeed, is the problem, YU needs to seriously ask itself the important question: We claim to be a flagship institution of Modern Orthodoxy, a model, a beacon, of what the Jewish nation should emulate. If that is so, are we going to be followers, continuing to downplay our support for the multiple walks of life, or are we going to be role models, trendsetters, proudly preaching our ideals? YU has taught me the necessity of appreciating and valuing the complexity of our community. I just hope that YU will not only continue to teach its students this important lesson of valuing diversity but also proudly and confidently declare it to the world.[i]

Gabrielle Hiller is a senior at SCW majoring in Jewish Education, and is an editor-in-chief for Kol Hamevaser.

[i] Many thanks to the numerous people who provided constructive feedback on this article. 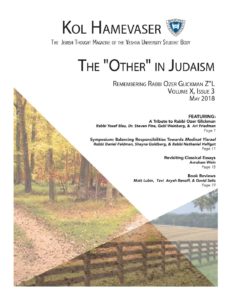